Way past time for an update... Back to living the dream

So, 1 year and three months ago I updated this thing and boy has time gotten away from me. My goal then was to stay on top of this thing like I had done once before. ALOT of things have changed since the last update, some things I will not dredge up again as they are meant to be in the past, of course I will update you on the positive stuff and and of course you will get the updates on the kids, grands, and the pups but more recently the DREAM has become a reality and you will see all the fun we have been having and hear about all the fun we are expecting to have!
First the kids- Jenifer has graduated with her Associates and has started back working on her Bachelors, she purchased her first home in Aiken, SC and continues to work and take care of Dallas- Dallas, has started school and seems to love the new-found fun of education. We was able to Christmas this year at her new house and life is agreeing with them.
Robyn and Anthony not much has changed with them they are still in Manchester and she is working at a local hospital- she is considering a career change that requires more college so they have tossed this up a bit. Anthony started a new job at "the other store" the "orange store" we won't talk anymore about that! Lia has just celebrated her 7th birthday- oh my goodness where does the time go? It was just yesterday that Robyn was pregnant, goes to show you how quickly time flies when you are having fun.
Nicolas has been completely resolved of his military experience and had moved back home for a short period of time- he has since relocated to Knoxville with the goal of being accepted into UT- we don't hear from him too much but ever so often we are blessed with an update, he is working and studying!
April too has since relocated twice since the update, she was in Georgia and then in Tennessee with us for the pregnancy of Alayla, she has since birthed her and relocated back to Georgia- why we are unsure as it seems we have been once again shut out of her life. But we have another beautiful granddaughter (although I really wanted another grandson) as now we have 3 grand girls and 1 grand son. The great thing is they are all healthy that is what really matters.
Michelle has been extremely busy this year from fracturing her ankle and having surgery to going back to school to finish up her education. Her and Cody were married in December and she (of course and him) relocated to Texas as he has enlisted in the military and is now stationed out in Texas.
Ok, I think that sums up the kids and grands.....
Now the DREAM- in some of my last blogs I ranted and raved about the post house buying experience where we were truck drivers and told to quit our jobs and come back and reapply. Well apparently God had other plans and things that needed to be worked out first, he started on both of us first and there were some things in our marriage that needed to be addressed before we could move forward- neither one of us was aware of. But we are now aware of why some of those other things never worked out. I am not going to play the blame game and point fingers about who was right and who was wrong- just know that summer of 2015 was one to forget, but before that happens we must learn from what has happened and continue to build each other up in unconditional love and faith. We have stepped back and made another run at this hill called life and we are doing things again that we swore we "would never," for example, I started back classes in the fall 2015- took Anatomy I and II, studied for the LPN challenge exam and PASSED! All in the same semester, that in itself was a HUGE accomplishment. On top of that dealing with some not so positive stuff. And then before the semester was out, I was offered a seat in the RN program- which I declined for several reasons, working on those kinks at present. My husband has been ever so understanding and supportive of this new decision to conquer this goal, and I truly appreciate him for it. All the while, we were struggling through an obstacle and told at this point (late fall 2015) DO NOT make any life changing decisions! TOO LATE, by then we had started back looking for a house to buy- but not any house, our piece of heaven on earth! So normally- I would have bored some of you with the details of the whole lending/ looking and negotiating process. Today is your lucky day and I won't unless you want details of the process and who was our realtor and lender, send me a message and I will gladly share those details. Just know your lender and realtor make a HUGE difference in your house buying experience and this is hopefully our last one and thus far has been the best- so the old adage save the best for last- we got it!
SO we have the FARM, now we just gotta work on the work part of it and get us some critters! I am going to post a few pics of the progress! 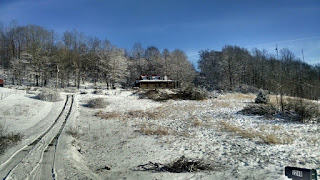 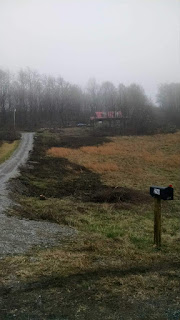 It just so happens where ever we go record winters/ snowfall follows- Christian says it because the year 2007 when I took a travel assignment to Vermont, I prayed for snow that year and boy did I get it, and every year since where ever we have been, God has blessed me with the same records of snowfall. Snow makes me smile- not sure why as it is in reality a pain, but it sure is beautiful to admire.
The second pic is another one of my "callings" my husband and many friends and family will say there is "something" about me and fire- the pic of part of the pasture will prove true, as I went down to burn the diseased willow tree by the mailbox and the winds changed and before I knew it, I was surrounded by this darn fire. Thankfully the hubby was nearby and we was finally able to control it!
Stay tuned, I have no doubt I will have more shenanigans to post in the upcoming summer months and soon we will have some farm animals too!
Posted by Unknown at 9:56 AM