The Dream is closer..

In the last blog we were rehousing rabbits and chickens and just in general doing alot of busy work stuff. Well as I would say, shit just got real! We are still rehousing chickens and more chickens and more chickens!! We have so many updates- I will start with the animals first. Rabbits were behind the house against the retaining wall, they seemed to get alot of afternoon sun and seemed far too warm in the evening. So we had to find them a better location, but where to move them that was convenient for us too? We eventually agreed upon the ridge above the chicken coop. It has a constant breeze of the southern winds, it is shaded by huge oaks and maples, fairly flat as it is a "ridge" that run the entire width of the property and it is located near the chickens, neighbors the goats on the west side and butts up to the woods on the north. It has been a little over a month since the move, we bred the girls to our buck prior to the move, we may have stressed them out so much that the pregnancy wasn't viable as it is day 32 and we do not have bunnies. This is part of the learning curve. If no bunnies soon- they will be bred back soon. We are more than certain they love their new location as they lay on the wire legs spread out, bellies on "grate" we say between us as we know they are relaxing and soaking up the life. Pampered, as we have green stuff galore and we "forage" every few days for purple clover, dandelions, milk thistle, wild roses, blackberries or whatever is growing. Occasionally, if we are being lazy they get a third of a banana or a carrot! They have a pretty good life, we say. Not that anyone on the farm suffers or starves..... as you can see by the sizes of these bunnies 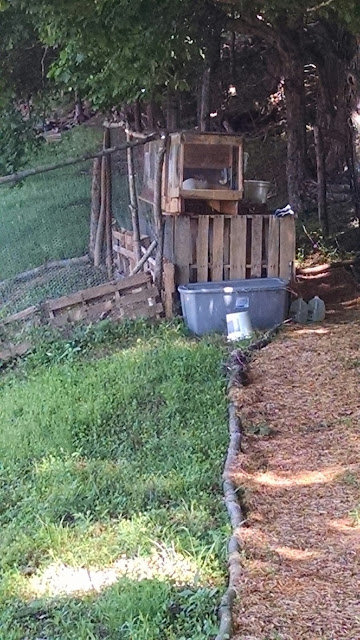 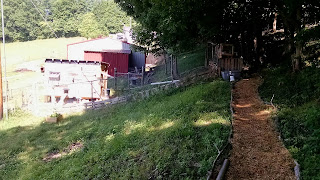 The chickens are equally spoiled, they get grower in everyday feed, they get to somewhat free range, we moved the compost and now only throw the compost down to them- they LOVE watermelon! We have (of the first group) 5 Plymouth Barred Rocks , and 15 Black Astralorps- 2 black astralorps were attacked and killed last week as they had been allowed to free range and a nearby neighborhood dog decided she was hungry- so they are back on lock-down for the meantime or at least until Molly arrives. We purchased a second group of "sex links" from Tractor Supply- you never know what your getting until their feathers come in. It now appears that we have 6 more Plymouth Barred Rocks, they are in a brooder box in the coop, separate from the big girls. As they get a little bigger, we will intermingle them. And now in the house we have another brooder box with our latest shipment of 5 Lavender Guineas and 11 Speckled Sussex, they arrived the same day the 2 Black Astralorps died. So although sad, we understand we will have unexpected losses.


Molly- the livestock guardian dog or some refers to them as LGDs, that is actually how we found her on LGD locator. She is just a pup about 9 weeks old. After doing some research it was believed to get a pup and train it for what you needed, some that are adults already have a mindset of what they will do and when as they are very independent thinkers and may or may not take orders. Statistics say only about 60% of LGDs are actually good livestock dogs. And it takes about 2 solid years to train them. So with that said, we have our work cut out for ourselves- again.
So in our efforts to get the fence up, buy more critters, train critters, breed critters and all the maintenance associated with all of this fun stuff- I haven't even mentioned the fun with the USDA, that we have been having. So far I just updated the critters, but in order to tell you about all the critters I must tell you that without the financial backing of the USDA the next and biggest set of critters would not be as possible without them. It isn't official as we haven't closed on the loan, yet. But we are scheduled to close soon and I don't have pics of the next set of critters either. So in the last update- we were on the fence between goats or sheep- as the husband said I cannot have both. Well, ALOT of research and observations helped us come to this choice of Katahdin Sheep, they are referred to as hair sheep. I will have to update you on our personal experiences with this breed in the next update. They require little to no human intervention- as I observed with goats they tend to need more human intervention, I want the herd to work for us not us work for them. They are hair sheep which means no shearing them, we originally went in to the farm idea of raising alpacas- they need shearing, they need parasite control often. Although they are awfully cute we couldn't find a "multipurpose" for them other than the fiber. Everything in this adventure has to be multi- purposed. So back to the sheep, this particular breed are well with parasite resistance, lambs on pasture- alone, hardy, attractive, of course the cuteness factor of lambs in 5 months, resale value for breed-stock is incredibly well and market lambs are holding steady vs goats. This of course is research- the real hands on experience will come in about 4 weeks to start, and as they arrive I will share the details. In the meantime, stay tuned for the next update with the potential of 5 ewes and 1 ram.                 Coming soon.......
Posted by Unknown at 9:16 AM No comments: